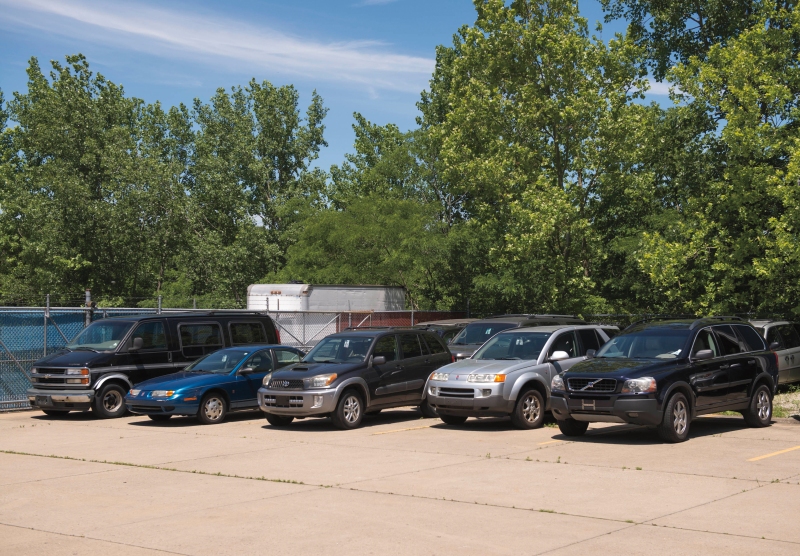 Karla was 40 years old, single, had lost both her parents and her sister in a short period of time. Working various jobs through a temp agency to become self-sufficient. Karla was making enough money to pay her bills but not enough to purchase a vehicle. She decided to start her own cleaning business and needed a vehicle large enough to carry her cleaning supplies and equipment to and from her clients’ homes and office.

Kenneth was divorced, in recovery, and each day he rode a bus to and from his job downtown. Though he had been granted shared custody of his teenage daughter, he didn’t get to see her very often due to lack of transportation. Friends drove him to church and other various places he needed to go, but a car of his own would help him see his daughter more often, look for a better job and to get to church and other places on his own.*

Karen (not her real name) had to flee her abusive husband, taking her baby son with her to live in a women’s shelter. Her mother, who lived nearby, was an alcoholic and not a good influence on Karen or her son. She was working as a dietary aide when her car gave out, and she could not afford to replace it. But she desperately needed a car to get to work and to transport her son to daycare.

Imagine for just a moment suddenly finding yourself in any of the above predicaments – living in a major metropolitan area and needing to find a job, get to work, buy groceries or take your child to daycare without a vehicle.

Next to impossible without a set of wheels.

What a perfect name, then, for a ministry comprised of a team of compassionate volunteers dedicated to helping meet the transportation needs of people in Cincinnati and the surrounding area…Wheels Transportation, Inc.

Sponsored through Crossroads and Whitewater Crossing Churches, Wheels reconditions donated vehicles and gives them to qualified recipients like Karla, Kenneth and Karen. For Karla, it meant receiving a 2004 Honda Pilot; for Kenneth, a 2008 Hyundai Sonata; and for Karen, a 1998 Toyota Avalon. The ministry has been an automotive blessing to more than 1,000 appreciative vehicle recipients since it was founded 17 years ago.

Who Qualifies for a Car?

A group of caring folks from Wheels’ partner churches review applications on a regular basis, explains Matt Murphy, a Crossroads member who oversees a myriad of functions for the ministry including transfer of vehicles and serves on the organizations Board of Directors.

“We can’t solve generational poverty by plopping a car into somebody’s lap. The general [criteria] umbrella for receiving a car is ‘temporary crisis,’ Murphy explains. “It’s usually people living on the margins who have three crises pile up and in the middle of that, their transmission blows. They’re stuck, they can’t afford a car, they can’t get to work, they can’t get their kids to their things. So, we give them a car that will get them through that period of crisis – usually a year or two – until they get back on their feet.”

“We started out as a sponsored ministry out of a small church on the west side of town, New Hope Community, and we outgrew the resources that church had,” recalls Al Duebber, known as the “face” of the Wheels ministry. “Crossroads invited us to talk about the car ministry. So, we went out there – they had an old Dodge dealership that they had acquired, and they had cut out a portion of what was the former service department. We ended up with close to half of the former service department for our operations out there. And it was a blessing to be out there 12 years.”

In 2018, Crossroads found itself with the opportunity to liquidate property, which meant releasing the former Dodge dealership that had served as Wheels’ home. While initially a challenge, this displacement has ultimately been a blessing and catalyst for expansion of the ministry.

Wheels now works its motoring miracles in and distributes repaired vehicles from what was once an automotive accessory center in Cleves. The former business happened to leave some actual wheels behind, which make perfect wall decorations for Wheels Transportation, Inc.

“At first, it didn’t seem like the building would work,” he says. “It’s a second-floor shop – there is a welding shop underneath. We were concerned we’d be putting a whole lot of weight on the floor. A structural engineer took a look at it and said we could park a fleet of firetrucks on the floor and it would hold the weight but positioning the automobile lifts could create a stress point on the concrete.”

The Lord, however, is known for working in mysterious ways.

It turns out the building’s structural beams run laterally, and they are situated exactly where they need to be for the lifts to fit correctly. Each lift is perfectly bolted to a beam, so there is no extra weight on the concrete, which serves as an insulator.

Wheels was ready to roll from its new location last December.

“This has all been designed and set by a group of people with very limited automotive experience, but they just have a passion for helping solve the crisis of people not having a car,” Duebber says. “And the teamwork that has developed from this ministry has been phenomenal. It’s a true story of faith and commitment.”

If You Open It, They Will Come

Wheels volunteers never tire in their drive, their passion, for helping others.

“We’re here to be closer to God,” Duebber says. “There are no sign-up sheets; no schedules. We just open the doors at set times, and the volunteers show up.”

Many Wheels volunteers are retired. Maybe four actually spent their career in auto or truck maintenance and repair. Others are former Delta employees, police officers, firefighters, or GE engineers. But whether you’re an ASE Certified Technician, a backyard mechanic that loves to tinker, or someone that likes to make a car shine, there’s always room for Wheels volunteers, Duebber and Murphy emphasize. No one is ever turned away for wanting to help.

If the Wheels volunteer team happens upon a problem they can’t solve, they consult with trusted, experienced partners located throughout the Cleves community and beyond. “We do have some partners we rely on if we get in over our heads, because we’re not a mechanical repair shop. At best,  we’re a used car prep shop,” Duebber notes, with a hardy chuckle. “Our support mechanism in this ministry is truly astounding.”

If you have a used car that’s in decent condition that you’re thinking of trading or selling, Duebber and Murphy hope you’ll consider giving it to the Wheels ministry instead. You’ll get a tax deduction for the car’s fair market value, but more importantly, you’ll get the satisfaction of knowing that you’ve been a huge blessing to someone in need, they note.

In fact, the Wheels team often hears stories of heart-felt appreciation or receives thank you notes offering an outpouring of gratitude for the difference the ministry has made in people’s lives. Although every recipient’s situation is different, the common thread is this: each had hit an unexpected bump in life’s road, and they had reached that crucial point where they were doubting God and wondering if He cared. Or they were doubting Christians and wondering if they cared. Or if anybody, anywhere, cared. Then Wheels entered their lives and gave them a car, and it was just what they needed.

“That kind of story just fires us up and keeps us trying to do more and more with this ministry,” Duebber says. “We’d like to see this ministry expand and help more people because the need is way greater than what we’re able to do. But we’ve helped a thousand families, and anytime you help a family you’re helping an extended community, so the number of people who have been touched by what God is doing through this ministry is huge.”

For more information about Wheels Transportation, Inc., or if you are interested in volunteering or donating a car, email wheelscinci@gmail.com, or visit the ministry’s church partners at www.crossroads.net/reachout/local/wheels/ or www.whitewatercrossing.org/wheels.